The journey of the first Greek immigrants in 1890 to New York and there lifetime with real photo and video images. How they make the American dream reality and how they love inside there hearts greece

The First Known Greek in America

The story of Greek immigration to the United States actually began much earlier, in 1528, with Don Teodoro Griego’s arrival in Florida. Mass Greek arrival to the United States of America does not begin until the twentieth century according social archaeology, though. Juan de Fuca made the discovery of the US-Canada strait in 1592 while on an expedition looking for the northern route connecting the Pacific and Atlantic.

With the news of land, Greek laborers migrated to New Smyrna Beach, Florida, in 1768. Although the original colony was abandoned by 1777, many of the colonists relocated to the nearby city of Saint Augustine and established a prosperous settlement there. The first city in the US where a thriving Greek community was developed is New Orleans, which also boasted the country’s first Greek consulate by 1866.

The Great Movement from Europe started in the 1880s when America needed inexpensive manual labor and practical immigration laws encouraged such migration. The last Europeans to immigrate to America during this time were Greeks.

Greeks were among the last Europeans to emigrate to America during the Great Migration, and they are few in number when compared to Southern European neighbors like Italy. According to figures from the Immigration and Naturalization Services, between 1890 and 1921, 421,000 Greek immigrants arrived in the United States of America.

The majority of them landed in the industrial Midwest, primarily in Chicago, Detroit, and Pittsburgh, as well as the East Coast, primarily in Florida and New York. On the West Coast, Greeks established enclaves as they worked in the building, lumber, and mining sectors. Anti-immigrant policies put in place at the start of the 20th century, however, led to a decline in Greek immigration to the US of America for four decades.

Mass Greek movement began during the same time period as the beginning of American industrialization. Therefore, unlike earlier Hellenic Diasporas in other regions of the world, the vast majority of Greeks began to arrive as a source of inexpensive labor in the 8th century BCE. Greeks experienced prejudice in addition to the demanding requirements and subpar working conditions of manual labor. Greeks were marginalized by racism and kept out of particular occupations and public places, and it fostered unfavorable stereotypes of them. Greek workers continued to engage in political and labor movements for immigrant social justice in the face of such assaults.

Since the first wave of Greek mass arrival to the United States of America, Greek Americans have historically been centered in New York, which has been the chosen location for initial disembarkation and permanent residence. Greeks, unlike most other European ethnic groups, immigrated to the United States twice on a large scale in the same century, which is a distinctive feature of this wave. During the second wave of mass immigration, Greeks settled in the Astoria neighborhood of Queens, New York, which has been referred to as the largest Greek community outside of Greece or Cyprus.

As the original post-1965 immigrants have attained residence mobility and have left Astoria, the Greek American community of New York is going through a cyclical transition. They have built satellite villages in Queens’ semi-rural surroundings. The Borough of Queens is home to the majority of New York’s Greek population. According to census news data, 86% of Americans are native-born, with native-born people of Greek origin somewhat higher at 88%. This demonstrates the group’s evolution and proves that Greeks after 1965 have evolved past the immigrant generation. Greek Americans today are people with an ethnic background.

In every aspect of American society, there are Greek Americans.

During the European mass immigration period between 1880 and 1924, an influx of nearly twenty million non-Protestant immigrants contributed greatly to the ethnic and religious diversity in the United States of America. 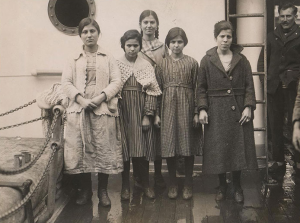 Historically, in the territory that became the United States of America, Jewish presence and incoming dates to at least the 1650s. Greek Jews (Romaniotes) did not begin to immigrate to the United States until the early 1900s, following the pattern of their Greek Orthodox compatriots. The immigration of Greek Jews is an integral component of Greek America. Their presence in the U.S. diversifies both Greek culture and Jewish faith. They established their first synagogue, Kehila Kenosha Janina, in 1927 in the Lower East Side of Manhattan. They retained their identity, distinct from both Ashkenazi and Sephardic Jews by maintaining the Greek language and conducting religious services in Judeo-Greek.

Romaniote Jews living in New York have a strong attachment to Greece, including visiting Greece. They understand Greek quite well and Greek cuisine and music are embedded in the community. Ethnic attachment is a major indicator of the degree to which members of a group are integrated into the community on three possible levels: culturally, socially, and psychologically. The Romaniote Jews of New York are unique in that they have achieved middle class status through upward social mobility and recent studies document their strong ethnic attachment, embracing Jewish and Greek identities despite living in America.

You will inevitably stand out from the crowd at some point in your life if you were raised Greek outside of Greece. Growing up Greek in America or Greek American is a particularly special experience because of the many Greek customs and the continual interference of family in every decision you make. Here are the top 11 characteristics that distinguish Greek Americans.

1. How You Get Your Name

Greek children are traditionally named after one of their 4 grandparents. So basically, from the moment you are born, the weird customs begin and you are helpless. Hopefully your grandparents don’t have any hard to pronounce ancient Greek names that really don’t mesh in American society. The first boy who is born usually takes their paternal grandfather’s name, while the first girl is named after her maternal grandmother.

2. The Role of Family

Your Greek grandparents are called Yiayia and Papou and fixate all of their attention on their grandchildren. They will let you eat whatever you want, whenever you want and behave a bit ‘spoiled’ as long as no one is around to witness. In fact, they won’t ever say to you, ‘Tonight we are having spanakopita.” Never. It is always, “What do you want me to fix you?” However, when people are visiting they get really strict and all of a sudden it’s like being at a Greek church.

Many Greeks will even call their Greek cousins their brothers or sisters when introducing them to outsiders because this is really how they feel. Cousins are your first and best friends. Of course, they come as a package deal with your aunts and uncles who will probably meddle in your business a time or two. Also, your Greek cousins might end up sharing the same names as you and your siblings, as half of their name pool is the same as yours.

4. News Flash You Will Never Eat a Hot Lunch at School

There must be something written that states that Greek children are just not allowed to eat school cafeteria menu food. But it’s not like you get a ‘normal’ lunch bag either. Try being in junior high school and whipping out Greek dolmades and tzatziki at the lunch table, and good luck with the garlic breath that follows.

5. You Have Regular School and Then You Have Greek School

Your friends are outside playing after school but you have to stay in and do homework because after a quick snack you get to attend Greek school at the church – for a whole two hours a couple of times a week! It starts at age 5, and after around seven years of 850 hours of lessons you are released into the world as a weak versed Greek. As much as you resent it as a child, learning to read, write and speak Greek seems much cooler as you reach adulthood.

Greek folk Dancing is a skill that only comes in hand when you are at a Greek wedding or other Greek celebrations. You can’t use it at the school dance or when you are hanging out with friends dancing. But, as a part of Greek heritage, the more than 4,000 traditional Greek dances play important roles. All parts of Greece have their own traditional Greek dances that tell stories and are symbolic of historical events. These classes also take place at the church most times and if your lucky, you might be able to participate in some competitions with other Greek schools.

Being Greek you will have to go to a lot of Greek wedding, which is the perfect platform for you to use your Greek language skills and your Greek folk dance moves! The Greek wedding ceremonies are seeped in tradition and while you are there, as you get older, your entire family will try setting you up with a nice Greek women or a nice Greek boy. Lucky for you, escaping the chaos is made easy by joining in a folk dance, of which there are plenty.

8. The World is Made of Greeks

You will be an expert on a plethora of Greek information that only other Greeks will find informative. Basically this means that you will know every word that stems from the Greek language, every adaptation of Greek cuisine and every celebrity that is Greek. If there is a connection to Greece, you will hear about it and be expected to know details as well. Besides knowing and loving celebrities who are part or entirely Greek like Betty White, Jennifer Aniston, Kelly Clarkson and Tina Fey, you will also find a place in your heart for people such as Tom Hanks, who is married to Greek, Rita Wilson, and you take issue with Brad Pitt for hurting a Greek…it’s a Greek soap opera to say the least.

9. You Will Never be a ‘Skinny’ Child

Greek Americans grow up rather ‘well-fed’. Not to say chubby, but let’s just say that you will not be skinny. And your parents do not want you to be. They feed you Greek dishes and pass down the traditions of family life revolving around food. Every big Greek gathering, important holiday or occasion will all take place with an enormous amount of food. However, all of the hours you rack up Greek folk dancing, you will stay fit. And with such a good cuisine, this is one tradition you will be thankful for.

10. Celebrating Your Name Day at School

Always an award moment, many Greek children skip this celebration at their schools and just have a familiar gathering at home. It’s not easy to explain that name days outweigh birthdays in Greek families. But you will try in vain to explain to your teachers and friends at school that in Greek culture everyone is named after a Saint and every year on that Saint’s day you celebrate your name day. They might not get it but are sure to be more than happy to celebrate it with you when you bring in homemade Greek baklava to share with the class!

They couldn’t pronounce his Greek name correctly, but Giannis Antetokounmpo is the man.  He is a greek pro ball player that has some other Greek brothers that are also good players in their own right.  I’m sure he is going to spawn a generation of greek talent because of the stir he has cause in the NBA.  I hear it already, the chant “greek freak” “greek” “greek” “greek” “greek” “greek”!