The United States now operates a Consulate General in Thessaloniki in addition to the Embassy in Athens. Tens of thousands of individual US citizens now live in Greece, while an estimated three million Americans living in the US are of Greek heritage.

The Greek War of Independence began in 1821 and concluded in 1830 when England, France, and Russia forced the Ottoman Empire to grant Greece its independence under a European monarch, Prince Otto of Bavaria.

The United States supported the emergence of modern Greece from the earliest days, establishing diplomatic relations with the country in 1868. Charles K. Tuckerman (1827-1896), the first Ambassador of the United States, was an American diplomat and writer. He served as the minister resident of Greece, which was at the time, a new job created by President Andrew Johnson. He was born in the United States but spent most of his working life working in Hong Kong and Greece. 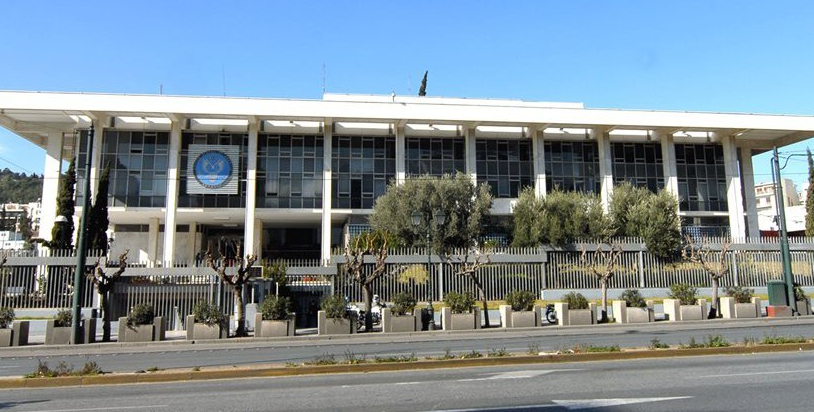 The Greece Embassy American Building took two and a half years, day and night to finish and cost $1,500,000 to build. The Strides Company of Athens, which has created furniture for numerous nations’ embassies around the world, made all of the hardwood furniture in Greece from American designs. All of the embassy fabrics used in the upholstered furniture were designed and manufactured in the United States of America. During the embassy building’s construction, almost 350 Greek engineers, craftsmen, and laborers were used.

The usage of local materials was prioritized. The embassy marble, cement, tile, and plastering materials are all Greek. The majority of the manufactured materials came from Western Europe. Machinery such as air conditioning, heating, and ventilation equipment, pumps, and transformers was among the commodities brought from the United States.

Walter Gropius and “The Architects Collaborative Inc.” of Cambridge, Massachusetts, USA designed the structure. It was built by the Athens-based “Albertis-Demopoulos Construction Co.”

The Chancery is a perfect square with a middle court containing a planted space and a fountain. Exterior and interior columns with Greek influences are used to support massive horizontal crossbeams. The american embassy building is air-conditioned and made of steel and reinforced concrete. These beams are attached to specially constructed steel hangers, which suspend (hang) the second and third floors of the three-story building. As a result, a cradling effect is created, assuring “give” in the event of seismic disturbance.

The building’s marble is as traditional as its united architecture. The majority of it is made of the famed white marble from Mt. Penteli. Throughout the structure, black marble from Saint Peter, Peloponnesus, gray marble from Marathon, and other native Greek marble are utilized. Greek artisans created the elegantly turned hardwood stair railing out of Greek pearwood. Don’t believe us? Have a general embassy overview for yourself!

What Is Hellenism In The United States?

You may be surprised to learn that Greeks do not call themselves “Greek.” Greeks instead refer to themselves as “v”— Hellenes. The word “Greek” derives from the Latin “Graeci” and has become the common root of the word for Greek people and culture in most languages due to Roman influence. However, in English, both “Greek” and “Hellenic” are used. Most English speakers today use the term “Greek” to refer to the people and culture associated with the contemporary nation-state of Greece.

“Hellenism,” on the other hand, is a far larger concept. The Hellenes’ language, culture, and Greece morals have had a tremendous impact on the world since antiquity. Non-Hellenic people have acquired and assimilated Hellenic values and aesthetics throughout history. Through this encounter, Hellenic civilization not only transformed foreign cultures but also transformed itself. This is a Hellenistic relationship. Indeed, Hellenism is characterized by an openness to new ideas and an embrace of beauty and truth wherever it can be found. In short, Hellenism is founded in Greek history, but it is larger than Greek culture. It is a part of humanity’s collective legacy for Greece.

Petrides gives a personal examination of his Greek background, aiming to comprehend the cultural forces that have influenced him and the people closest to him on the centennial of the Destruction of Smyrna in 1922 and the anniversary of the Greek War of Independence. Petrides investigated six major periods from 2,500 years ago to the present, beginning with a thorough research process that included archaeological items, scholarly sources, family anecdotes, and historical images.

George Petrides is a sculptor living and working in New

York City and Athens, Greece. He makes abstract figurative sculptures ranging in size from a few inches to more than life-size, mixing the timeless with the current. Born in Athens in 1964 and raised in New York, he is steeped in ancient Greek sculpture and the works that impacted it (Donatello, Michelangelo, Auguste Rodin, Aristide Maillol, and others), as well as the twentieth-century modernists who re-interpreted these traditions. He closely studies current figurative sculptors, particularly those that draw on ancient Greek art, such as Charles Ray and Huma Bhabha, as well as the many other artists involved in a figurative sculpture revival. More updated 2022 information can be found on the Petrides art site.